Me and the boys

Good day today, went to Bowden and met with two high-risk guys. I also met the head of security and an IPO who suggested we come and do a presentation to the PO's. We'll do that, it's a great idea.
I had an epiphany for my Bliss album. I'll do it without photos, instead, it will be memories from my childhood that I don't have photos support for. I've put the album together, and will scan some photos of me as a child to put throughout. I'll use a number of techniques I've gotten from the book I'm reading on Art Journals. After wondering in the back on my mind what I shall do about this month's challenge, NOW, I'm excited.
Posted by Electra at 9:57 PM No comments: 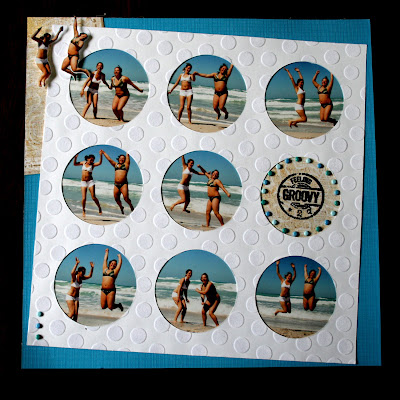 After months of working avery week on my photos from our trip to Cuba back in February. the scrapbook pages are finally all done. I never though that would happen. What a great feeling!
Posted by Electra at 11:15 PM No comments:

It seems I post at the end of the day as an afterthought. It's not that I don't want to post, it's just that there are so many other things I want to do as well. I got some scrapping done tonight, trying to get some work ready to take to Scrapyard on Thursday-I can do some work of my own before my class. I fall asleep almost on the way home and then have a ten minute power-nap when I get home. If I begin to work in my studio, I don't cook eat, or do much else, so the past couple of days I haven't allowed myself to start anything until I've cooked and eaten. I made some amazing Greek soup tonight, I really can cook when I do it. It's all about discipline or my lack of it. It is nice to have such a full life though, that I hardly want to take time to eat or sleep. Maybe that's dysfunctional.............
Posted by Electra at 10:49 PM No comments:

I'm reading a book about creating an art journal. In it are some "vision cards". I closed my eyes and picked one, it says
"embroider".
That means I shall embroider something this week. Something. Or may I embroider the truth?
I was also prompted to pick out 4 amazing things from my stash and use them. Ask myself why I'm not using them? The answer is, because they are hidden away, in my file cabinet. I can't see anything that's in there. That in itself is another good (very good) reason to NOT buy any more. Maybe the best yet.
I laid awake for awhile last night and browsed through the travel books on Utah, Arizona and New Mexico. I looked at Phoenix, nothing there interests me. then Albequerque, not too much there either. But SALT LAKE CITY. Well, that's another story. Lots of interesting stuff there. We shall have to spend an overnight there. Getting excited already.................
Posted by Electra at 9:13 PM 1 comment:

So I wonder where this ton of Ansel is? It sounds interesting. It's been a productive weekend, I have a rearranged studio and my work table is not right in the window where I can work in natural light until the sun goes down. I'm pretty sure I did a crummy job on the floor, but it looks good. (for now)
I was incapacitated for last evening and had some trouble getting down the stairs this morning. The ol' bod' is NOT used to working on my hands and knees/bent over, ripping carpet, pulling staples, laying tiles, moving furniture. Not even one bit. I'm still pretty sore and have had to lay on the couch/bed doing nothing for most of the day. Made a wonderful meal though, rock cornish game hens, dilled potatoes, bbq-ed asparagus. Man, it was good! We ate outside and there was one little cloud over top of our yard that rained on us while we ate. Not before, Not after, just while. You gotta love Mother nature.
Going through all my stuff and organizing it has been a labour of love and shows me all the goodies I have to play with. Now I just want to play.
Posted by Electra at 10:19 PM No comments:

The furniture is out of my studio and some of the baseboards are off. We are about to disconnect the computer and I'll be off-line for a few days while we do our thing. It's all looking good, we're going to set things up differently, in a way that brightens the entire room and gets rid of some of the clutter. And THAT hopefully, will allow me to create even more easily with less distraction. This is an evolution for me, but a good one, I think.
Posted by Electra at 8:23 AM No comments:

Another good day. that is, until I rear-ended someone with my truck. Now I know what kind of damage my bush bars can do. I wanted to cry, but what's the point?

Got a call after that that one of my employees is in hospital, had a seizure. Her mother, who called, just had surgery for breast cancer and a week ago, they learned that they did not get it all, there is much more. And her dad just lost his job.

This LO is of my Uncle who is now in his 80's. I haven't done the title yet, it was in 1941, I had to email my aunt to learn the year. He looks so young and so fresh, with his whole life ahead of him. and he is off to war, a horrific war at that. My gosh, we have no idea what it was like then.

I'm happy they caught one of the gang members who did the triple murder on New Year's Day. The turd was let out on $2000.00 bail a couple of days before, after facing over 30 weapons charges. My god, I know sure who is more screwed up, our justice system or the thugs. I suspect it's the former. We should rise up in the streets. But I can't. Not with the work I do. It's just SO wrong though.

Another of my staff called me a couple of days ago, her daughter was assaulted pretty badly by her BF, for want of another word. Mom said they had no food and I was trying to to think how I could help her, so I went through my freezer and cupboards and took some food into work. I asked our cook if she could put together something as well, I suggested some cooked leftovers that they could just heat up. There is only her and the two babies, the guy is in jail (if he still is). Well, she put together boxes and boxes, meat and cereal and rice, pasta, fresh and frozen veggies potatoes and frozen french fires, this list went on and on. It was wonderful. I took the stuff over to her mom and she was so grateful and so touched. Later my boss said I could take credit, but I can't. It's the conversations I started having with Creator again asking to be shown way to be of service to him. It's his credit. not mine.

Great day today, amazing what a difference it makes, starting the day with a smudge. I need to get back in that habit. Have spent the last five hours taking apart my studio is preparation for pulling up the carpet and tiling on the weekend. Yikes, what a lot of work. Yikes, what a lot a stuff I have. It's shameful. I am tired, been a lot of work this evening and a really busy day at work.
The LO is of Mom who died 3 years ago this week, 5 days after her 90th birthday. That was a tough year. It's nice to be able to reflect on her life without the pain and anger. Goodnight.
Posted by Electra at 12:01 AM No comments: 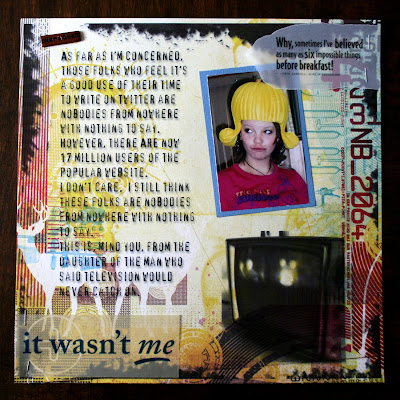 It's past bedtime, just wanting to say I've been working all day on a canvas for my bedroom wall. I'm liking how it's looking. Maybe I CAN do art. For the second part of the day, I scrapboked and did a lot of that yesterday. I've done some really cool LO's, feeling pretty fine about them. It IS bedtime however. My work is done here. :-)
Posted by Electra at 11:44 PM No comments:

Oh man, I should never start doing LO's when I need to be somewhere. The committee in my head says, "You don't need to go out, just stay in and keep making beautiful stuff! Arrggghh!
Shut up!
I'm outta here.
Posted by Electra at 12:10 PM No comments:

Simple. Made it through the week, almost, it's Friday again. Had a good day, went to sleep last night planning art. work up doing the same. Hmmmmmmmm, what's my heart telling me, I wonder?
Posted by Electra at 9:15 PM No comments:

Trying to get back on track with posting, seems like I've been gone far too long. I've slowed down a fair bit, my word for the year is "calm" and I'm trying to apply it to my life. I've been going to bed earlier for awhile now and working at a much slower pace. I like it. I like it a lot.Haven't been working out for awhile now, but there are good reasons for that. I plan to get back at it next week, at least I haven't gained weight.I sure do like food. Always have, always will. So be it.
Posted by Electra at 10:25 PM No comments:

It's June, whistle, clap, cheer! It seems like I've been sick forever, but no matter, summer is here. Yeeks, I have to get going, get the truck into the shop. Only have time for an affirmation-I will have a good day today, in spite of being sick. The sun is out, I accomplished some good artwork last night and all's right with the world. TTFN
Posted by Electra at 6:52 AM No comments: