Good grief, I am SO disorganized!  I just posted, saying I am trying to get caught up in my blurfing and I subsequently blurf on over to Gingersnap Creations where I see (and remember at the very same instant) that I am one of the visiting artists this month.  So I halted in my blurf activities to come back here and post my own Western project. 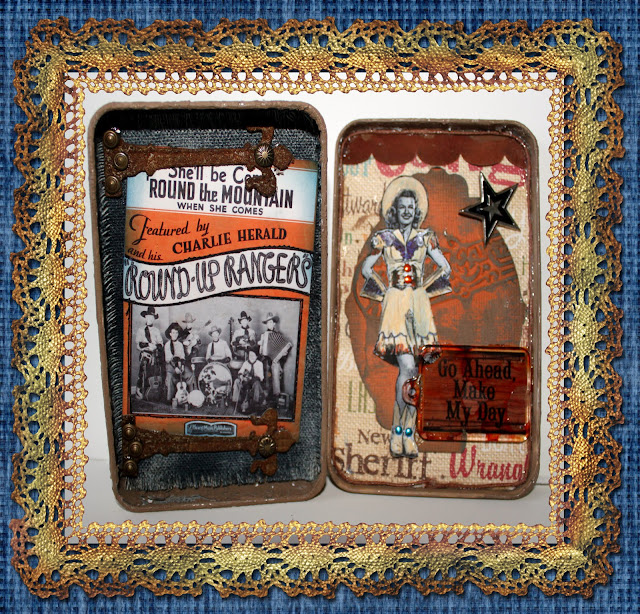 OK, let me 'splain.  The cowgirl is Dale Evans.  I mentioned to a friend that I found a picture of Dale Evans online and she said "who?"  (heavy sigh)  Dale Evans was the wife of Roy Rogers. I grew up on Roy Rogers and Dale Evans.  And if you don't know who Roy Rogers is, I give up.  (and feel VERY old). (another heavy sigh)
BUT, that's not the coolest thing.
On the left is a scan of an old music score.
Charlie Herald and his Round-Up Rangers.
singing, "She'll be Comin' Around The Mountain When She Comes."
ALL TOGETHER NOW!!!
Oops  Sorry  I got carried away.  Focus, Electra
Charlie Herald is (well, WAS) my Mom's cousin and my Mom played honky-tonk piano in the
Round-Up Rangers!
This was when she was 17 years old.  Let's see, that would have been 1933.
I know, I know, she wasn't in the photo, but that's cus it was an "Boys Thing".  They just let her play with them, cus none of them could play the piano.
When they played in the saloons, she had to come in a play the set and then go back and wait outside until the next set.  I guess some things never change.  lol
Can you believe those hats?
I'm almost embarrassed to admit Charlie was kinfolk of mine.
But it gave me a good story for this project, didn't it?
There are some really fun projects at Gingersnap Creations!
I hope you visit and play along!
Posted by Electra at 10:46 PM