I really like Bonnie Zeiman's
Photo Art Friday
There is some AMAZING photographic art there!
This week, Bonnie has invited us to post a black and white photo. 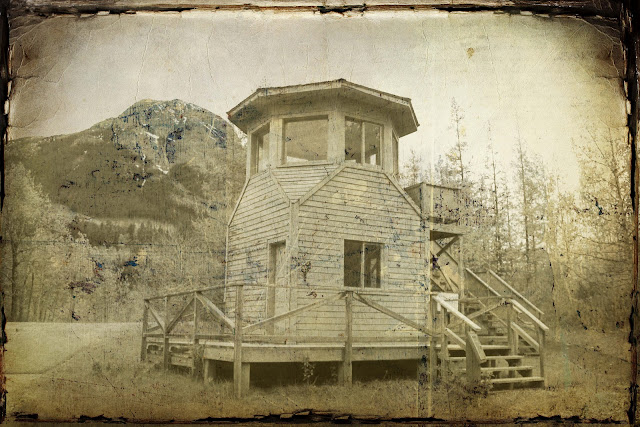 OK, I know it's not exactly black and white,
I added a sepia tint to make it look like it might have been taken during the war
Anyone who knows me knows I don't follow directions well..
This is a photo of a POW guard tower in our Kananaskis area.
We were out there on the weekend and had a picnic near this tower-
it was very strange and somewhat creepy to look around as we ate our sandwiches and
know that 10,000 German prisoners lived here at one time.
Initially, there were German Nationals and Merchant Marine Seaman,
who were captured in Africa.  Later, 600-700 German prisoners were kept here.
After the war, many of those Germans prisoners returned to Germany,
got their families and returned to the area to settle.
We must have treated them well!

I also added a couple of textures by Bonnie Zeiman and an overlay by Shadowhouse Creations.

Thanks for stopping by!
Posted by Electra at 7:00 PM