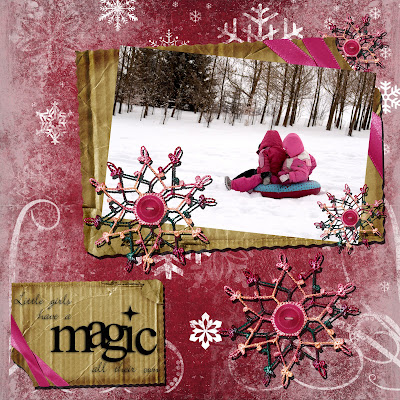 I posted this pic of the little pink girls tobogganing b'fore. But now it's in a LO and I just think it's so girly and so pretty! Well, I guess girly and pretty are kind of one and the same.
On a different note, has anyone else had their version of WORD (as in the Microsoft Netherworld) totally disappear from their computer? Where did it go? Why can't I do any more word processing? What is it about my life that has made Bill Gates et al feel the need to make it their mission to screw me over???? I'm not kidding folks, it's gone. I looked everywhere for it. Gone. and that is not the only thing. I can no longer open Power Point slide shows, Excel documents, god, if I look down my damn underwear is probably missing too!
And yes, I've restarted the mother ship. It hasn't helped.
I know I've mentioned this in earlier posts, but I really really really hate Microsoft. No, hate is such a strong word. I DESPISE them. And I felt that way before they took my Word.
My word! She IS upset, isn't she?
Posted by Electra at 7:38 PM