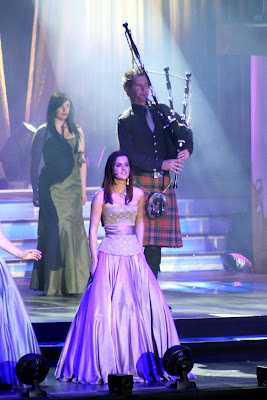 Playing with them was Anthony Byrne who has actually performed for the Pope and the Queen, no less. At one point in the show, he walked through the crowd from the back, in the dark, with just a light on him, playing Amazing Grace. The crowd started to hum along, really softly at first and then everyone was joining in. Later in the show, the ladies said that in their entire North American Tour, they had never had any audience do that. Brought tears to my eyes, more than once, this concert did. And THAT is the mark of fine music, IMO.
Posted by Electra at 8:30 PM