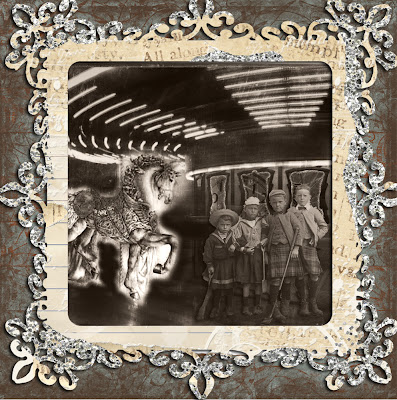 Jeanette of Soartful challenges gave us a lovely image of a carousel horse this week: 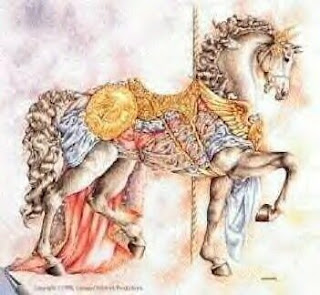 It's lovely, isn't it?  Well, the first thought I had when I saw it was of a photo I took of our old-fashioned carousel at the zoo this past year.  So I combined them. But then it needed something else, something like, um, I know!  Victorian children!  So I googled "Victorian children" and found this interesting shot of these little darlings.  Look at the looks on their little faces.  Do ya think they're a happy bunch?  Now if you know me at all, you know that I generally add some kind of caption to my LO's.  THIS LO, however, begs to be titled by you, dear reader.
I think it looks as if the horse is sneaking up on the little buggers and is going to scare the be-jee---  OOPS!  I said you could tell the story.
OK, you're on.
What's up with this?
I can hardly wait.
Posted by Electra at 9:58 PM