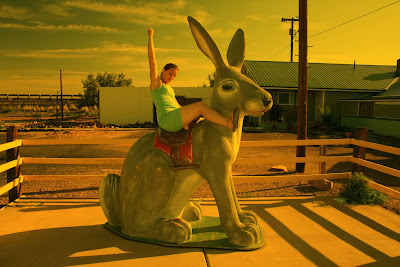 We found this early one morning somewhere in Arizona. I had read about the giant jackrabbit on some Route 66 website before we left on our Great Canadian road trip this summer, and we arrived very early in the morning, before it was open, or for that matter, before anyone was up. That allowed us to be silly. I won't post the picture of me up on that giant rodent, (I needed help getting down after a fairly feeble EEHAW!?! but as you can see, the girl had a blast. I used Virtual Studio on the print, because it makes me think of an old Poloroid photo in a kind of whacked-out-maybe-it-fell-in-a-vat-of-hot-steaming-toxic-chemicals-kind of way. Try to say that fast five times while patting your head and rubbing your tunmmy. If you can do it successfully, send me your email and I'll send you something very special and very valuable. But be honest, because I have cameras hidden everywhere. Everywhere.
Posted by Electra at 10:33 PM