pulled over by the RCMP tonight 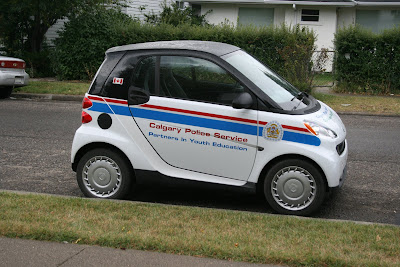 for having no taillights on the truck. who Knew. I thought he would give me a warning instead of the ticket, cus I was SO surprised, but he didn't. Gave me a full-fledged ticket. The bum. Maybe he'll run into a moose on the way back to his detachment. OK, that was wrong. A squirrel. Maybe he'll run into a squirrel. It wouldn't have a effect I'm hoping for though.
Note the car. This little ride-on lawnmower was parked out front of our house the other day and I simply HAD to take a photo of it. Can you imagine this in a car chase? I would win, hands down. Too bad it wasn't the city police who pulled me over. I could have outrun them.

FRIDAY FILL INS:
It was a dark and stormy night under the stairs in my furnace room.
My cat was busy hiding in the Xmas decorations under the stairway in the furnace room, so I offered to take the books myself.
Rushing out, I tripped over the snow shovel I had left by the front door.
Oh crap,I think I heard a howl!
Shhhhhhhhhhhhh, maybe it won't notice me.
Listen you cretin, I said to the child dressed as a little witch, "Give me something good to eat"
As for the weekend tonight I'm looking forward to an uninterrupted sleep, tomorrow my plans include getting the taillights working on my truck, and Sunday I want to make sure I remember to set the clocks back so I don't end up at work an hour early!
Posted by Electra at 12:26 AM