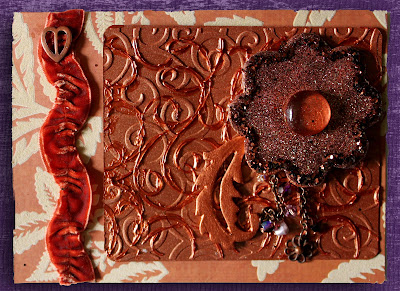 This week's challenge from the Order of the Opus Gluei is to create something that sparkles. Easy Peasy, my favorite thing to do. Even my cat has glitter in her fur. And then, I learned that my friend Linda has joined the design team at Gingersnap Creations. Yay Linda!!! Well, I wandered over to their site and became enamoured with a couple of their challenges, and whaddya know, I decided that the sparkly thing I was going to make could also be copper coloured. I guess I shouldn't call it a "thing", but that's what it was as I was galavanting around the Internet. It is now a card. Officially, it was planned as a card for my friend in England, but by the time I finished sparkling and glittering and what-not, it was WAY too heavy to send WAY over there. I don't know if you've ever tried to mail anything in Canada lately, but suffice it to say, I would have had to take out a bank loan. So she doesn't get it.
Whenever I visit (and admire) other folk's blogs, I appreciate how they take the time to explain how they make their creations and the supplies and all that. Me, I'm way too ADHD to do that, for the most part. HOWEVER, tonight I can. cus it was simple. First, I put some copper-coloured cardstock through my Cuttlebug to emboss it. (NO, I don't remember where I got the cardstock from, work with me, will ya?)
Then I embossed it again, using a Dreamweaver stencil and Dreamweaver metallic copper embossing paste. Then I painted a chipboard leaf and flower (from heaven knows where)with copper acrylic paint. Then I covered the flower with glitter and a coppery-thingie (what do they call them, oh yeah, "gem") from Michaels, then I took an earring that I don't wear much anymore from off my dresser and took the hook off it and attached that, then I mounted it all on some flocked cardstock (good grief, I don't know what company made that either, maybe I should just give up) and then I attached some mystery ribbon. To the front and to hold the vellum liner inside.
And that's it.
I've just proven to myself that there is no point whatsoever to try to tell you how I make something, it's an accomplishment for me to just get it made. I feel so traumatized. It's posted. On this blog. So never ask me to do this again. cus that's all you're going to get.
Posted by Electra at 6:41 PM