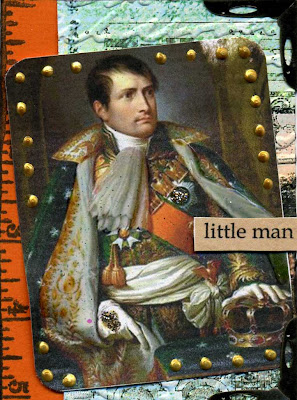 Surely we've all heard of this little guy?  (I think I dated him once)  Monsieur B. was the Emporer of the French people from 1769-1821.He fought some MAJOR battles, in fact at the museum the other day, I was fascinated to see a huge diorama with a total of 60,000 soldiers going at it, with him at the centre of it all.  Not someone I would want to upset.
In honour of Paris In July, I did a little research on him.  What I've decided to share with you is the following quotes:
and finally:
NUMBER 10: "The best cure for a body is a quiet mind."
which is why I shall say good night now.
Good Night.
PS.  I have to add this disclaimer:  1.  I LOVE music and can't imagine life without it.  2.  My daughter is a VERY good tuba player and I love her a lot.
Posted by Electra at 10:19 PM