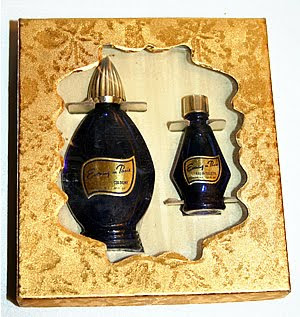 OK. I have never been to Paris. We've established that. BUT, I have a treasured memory I would like to share with you that's kind of "French" lol
When I was a little girl (REALLY little) I loved to sneak into my mother's room and try out her perfume. Not the sharpest knife in the drawer, as she would OBVIOUSLY KNOW I was in there, not having any perfume of my own that didn't smell like toilet water and come in a plastic bottle. (real toilet water, not the infamous "eau de toilette" that was so popular in the 50's)
Anyways, on my mother's dresser, along with her mother's fancy silver engraved comb, brush and hand mirror was this cobalt blue bottle with the label "Evening in Paris". Now I had no idea what "Paris" was. We didn't get a TV until I was six and the shows that were on there had nothing to do with anything fancy like that. But what I DID know was this was something magical. It smelled like something a queen or a princess would wear, (both of which my mother WAS to me at that tender age) and I new it was one of my mother's most treasured possessions.
Here is what I learned about it:
In the year 1929, Borjois Paris developed a perfume called Evening in Paris perfume. This is perhaps one of the most recognized and celebrated perfumes all over the world.
It became an instant success and was perhaps the favorite fragrance during the World War II era. Even now this charming fragrance is a reminder of wartime stories, dance halls, seamed stockings worn by the women in those days and of course the GIs.
And MY MOTHER wore it!
That's my French-ish story for now, I'm off to Thyme for Tea to visit the lengendary city with those who are really there and who HAVE really been there. Maybe one day...
Posted by Electra at 11:44 PM