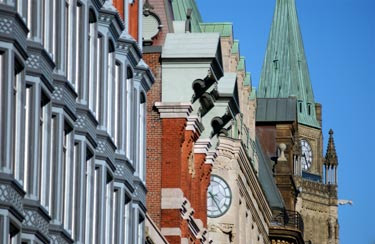 Good morning, it's a beautiful day in the neighbourhood. Last night was "interesting". I checked into the hotel about 5 PM. Right away I went for a walk to see if I could get some sunset photos. Crossed the canal and walked to the "market" where all the restaurants are located. It took about 15 mins. No problem. I explored and saw some cool stuff, but the sun set pretty quickly and I decided to return to the hotel and have supper there. I crossed the canal and started to walk. Long story short, I zigged when I should have zagged. Seriously. I walked to Quebec. Now for those who don't know, Quebec is a different province (ie state) than the one I started in. This was NOT the plan. Good grief. I, of course, did not know I had done this, as I've never been here before. I walked and walked and walked, for over an hour, thinking, "well, I sure am taking the long way", but I was following the river and my map said I should be fine. I didn't know I was going north, instead of south. IT WAS DARK, OK???? Well, anyways, after an hour and a half (OK,OK, I'm a little slow on the uptake sometimes), I spotted a Holiday Inn in the distance. Success!! I trudged along, keeping it in sight. I made it there. But, it was not the Holiday Inn that I was staying at. What the heck? I asked if there was another one. Apparently yes. Oh, only 5 minutes, she says. (Did I mention everyone was speaking French, not English?) I thought that was strange. Off I went.
After 20 mins. I made it to the next Holiday Inn. Notice I say "next". Still not my hotel.
By this time, I'd concluded I'd stepped into a different dimension.
So I got a cab. (I could hardly walk at this point) He asked me where I wanted to go. I told him. He said "you mean in Ottawa?" HUH? Aren't we in Ottawa? NO.
What can I say. |The cab ride took a while and cost $15.00, so that tells you how far away I was. Did I mention the cab driver was speaking French too?
Back at my hotel at last, I collapsed in bed and ordered room service.
The weather is gorgeous, by the way.
Posted by Electra at 6:17 AM