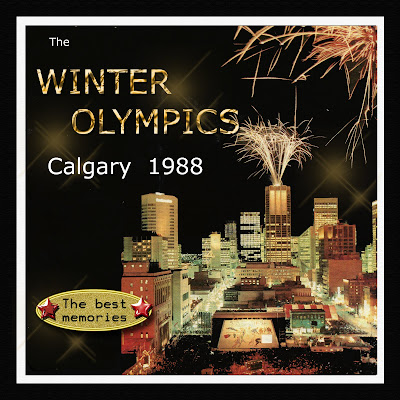 Normally I would be posting this week's Friday Fill-ins, but I just spent three hours watching the Opening Ceremonies of the Olympics and I am still in awe. I cried lots, for different reasons: 1. Canadian pride 2. how beautiful it all was 3. fond memories of 1988 when we had the Games here in Calgary 4. sadness for the young man from Georgia who died in a luge accident today
I've posted this digital LO that I did a while back-I had cut out this newspaper picture (w-a-a-a-y back in '88) and dug it out. Of course it was faded and crumpled, as it was about 20 years old, but I scanned it anyways and then put the rest of it together. My best friend had died just before the games and her daughters gave me her ticket for the figure skating finals. So I was there when our Elizabeth won the silver medal. It was so AMAZING! I still remember it like it was yesterday-we all went crazy. A once in a lifetime event. I ran some restaurants downtown and the atheletes would come in and end up dancing in the aisles with us and singing-what a blast. and each night there were fireworks over the city-we stood right underneath them every night. The Calgary Tower (for years the tallest building in the city) was lit up as the Olympic Cauldrun. They lit it again a few weeks back when the torch came through town. Super stuff.
Now I'm not really into sports. Not at all. But there is something about the youth and the calibre of the athletes, and the passion and the drama that gives me tingles. And we Canadians aren't much for big displays of patriotism, but I always (quietly) tear up when our national anthem is played and well, the pomp and majesty of it all just about killed me. Weeping. But I'll never admit it. We Canadians say "Please" and "Thank you" and that's about the extent of it.
So I cried. I'll deny it if you tell anyone.
Posted by Electra at 10:30 PM